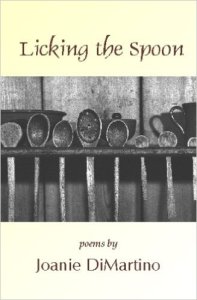 “Joanie DiMartino’s poems savor the experience of being a woman.  Many of them are inspired by food and cooking, whether it’s preparing her grandmother’s legendary spaghetti sauce or making cornbread in an historic Dutch oven, exploring the mysteries of anorexia or her own reluctance to devour a female crab.  But along with a woman’s sensibility she brings a voracious appetite for language to the table.  No wonder she has titled this, her debut collection, Licking the Spoon.”

–Sue Ellen Thompson, author of They and The Golden Hour

Goodwives spoke of ‘white meat’: milk,
mammary glands, breasts, nipples, with these they fed
their young.

The slender maid on the milking
stool enchanted with rhythm against her pail: a steady
incantation of liquid,

like colostrum, the woman-cream,
transformed into a superstitious witch’s milk: rich,
forbidden.