He said her name.  In April of 2016, President Barack Obama said “Alice Paul.”  He was probably the first American President to do so publicly since Gerald Ford, and with more respect than Woodrow Wilson ever did.  And it brought tears to my eyes.

During his speeches, President Obama also often listed “Women reaching for the ballot,” as one of the many progressive movements in history that brought equality and justice to half the nation’s citizens.  When the President appeared at the Hillary Clinton rally in New Hampshire , I cheered–the lone voice to do so–when he spoke this line.

President Obama reads about the English roots of the militant suffrage movement in the United States, as Page Harrington, Director of the National Woman’s Party, looks on.

Tonight, this is how I want to remember his Presidency, as the first President to put  the suffrage movement into the fabric of national history and memory when he said Alice Paul’s name and added the headquarters of the National Woman’s Party to the many sites managed by the National Park Service.  No President before Obama ever toured the museum, or appreciated its value to American women and our cultural identity. 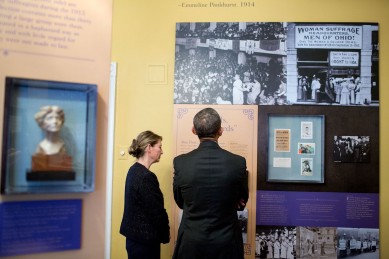 This museum both celebrates and honors the hard work of suffragists and feminists to win the vote & to write and fight for the Equal Rights Amendment.  The HERstory within these walls inspires us now to continue to reach for equality, using the tool so dearly won by women nearly a century ago–yet these were women who knew the vote was just a beginning.  Tonight, we remember a President who respected American women enough to honor the struggles of the suffragists.  Tomorrow, we will remember their strategies to actively engage in democracy, to seek justice and equal rights, to march Forward, Into Light.

Even better, the next time you visit Washington, D. C., stop by and take a tour!    Click here or here to learn more about the Belmont-Paul Women’s Equality National Monument or the National Woman’s Party and plan your visit.